My evolution as a bicyclist.

As with many people out there, it all started when I was around 5 years old. That new-found overwhelming sense of freedom that comes with learning to ride a bike. The wind in your hair (this was pre-helmet), the speed. The JUMPS!

I went from learning to ride, to yearning to ride, to racing BMX, to climbing and flying down mountains. Much of formative years were spent on a bicycle. Please note that at this point, I had no idea why anyone would ride a bike that does not take jumps or have knobby tires...road bikes just seemed like a waste of time.

Fast-forward a few years and the bike becomes your only mode a transport, it's more a tool than a toy at this point. A couple more years and your friends are getting driver's licenses and suddenly the bike morphs into a symbol of un-cool transportation, a far cry from the initial interaction with it.

I then went through a huge car-loving phase, which took nearly the same progression as the bike phase. However, at a certain point I felt the yearn, I heard the call to ride again. Here's how I answered it. 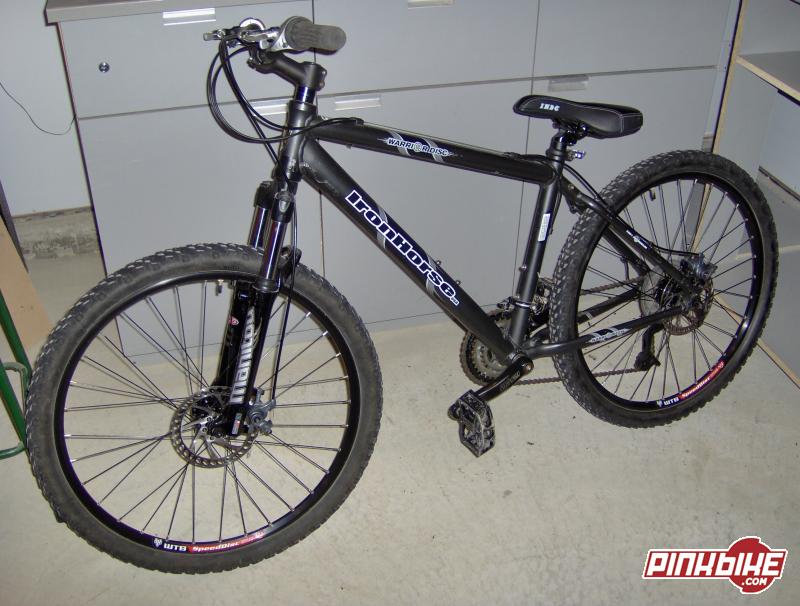 My first new bike since I was a kid was a 2003 Iron Horse Warrior Disc from Sport Chek. This was bought as a "Last Year's Model" in 2004.

I bought this to commute to work, but was blinded by my why-would-anyone-want-a-road-bike attitude. I commuted to work on it fairly regularly. It was after a few months of me commuting that a co-worker got a new Kona Dr. Dew hybrid and let me try it out. I was amazed at how fast and smooth it was on the road! I was starting to see what the appeal of Road Bikes was...that effort:speed ratio is awesome!

After that I bought slicks in an attempt to emulate the smoothness and speed of the Dr. Dew. It was OK for a while, then we moved and my commute got longer. The downsides of riding a mountain bike for long distances on a road became glaringly apparent.

Time to enter the next era.

At this point I had accepted that I was a road rider -- just not a road-bike rider. I hadn't ridden on dirt or gravel in years and decided it was time for a more suitable upgrade. I think this was probably my infatuation stage with riding. I got a more road oriented bike with almost slick tires, a more forward seating position and disc brakes...it had to have discs! Oh and lots of gears for hills and such.

BUT! I wasn't quite ready to accept full roadie, those were still too fragile and single-use in my mind. I'm going to want to go off road for a bit...sometimes I told myself. There's no way I'm going full road.

Well, as the years rode on my bike slowly but surely was starting to morph into a more aerodynamic, aggressive-riding-positioned, slick-tired, bull-horned abomination.

The bike had been so hacked up with different tires and handlebars and seats over the year...it really looked like a hybrid bike trying it's best to be a road bike, but it never really felt right. If nothing else, it taught me what I do and don't want in a bike.

The Kona taught me one main thing. It doesn't matter how much stuff you add to a bike, you're not going to change it's core values by tacking on components. I needed something new, something simpler and more efficient. I've always been intrigued by fixed gear bikes, but I knew I wasn't ready for my 36 kilometre daily commute on a fixie out the gate. Then I noticed Kona made a single-speed with a flip-flip hub. I ended up buying a used, 2009 model for $280, I was elated! From the first ride I was hooked. All the chatter I read on the Internet about being more connected, feeling the road and all that (what I thought was) BS, was true! I have to say it's a way different experience, the feeling of getting the power to the road is wonderful. Let me sum up what I love about it:

The cons:
- Sometimes, the lack of acceleration is tough when taking off at intersections - The lack of taller gears means top speed is limited

Despite the cons, my commute time has gone down by a few minutes each way and average speed has gone up a few km/h (I think I was lazily downshifting more than I thought I was). The most important albeit subjective thing, I can say I have way more fun on this bike than any bike than I've ever ridden in the past. The funny thing, it has the least stuff. It's like I've gone back to my cycling roots after straying for so long, only realize I was chasing something I'd already known and had. Simplicity. Fun. A plain old bike.

Conclusions - What does this bike talk have to do with anything?

The main reason is that I was thinking about this evolution of biking the other day and it made me realize how it relates to everything I do in life. The way I went from initial forays and assumptions to infatuation and wanting-it-all (hybrid) to distilling things down to what you really want and need.

This same concept can be applied to tech/software development, to banjo playing to cars. I have to say with each and every one of this same progression has applied. I plan to write another posts with a summary of each of those and how it's all gone down in the future.

For now, keep on biking.

Very recently Marco Arment published an ad-blocking app from the iOS App Store. This application was called Peace and…

I know it's been said time and time again; the importance of the concept of community in the software…